I’m usually very content to stay close to The Golden K.  On one hand why wouldn’t I be?   The foothills are always a beautiful place to be; even more so during late spring after a long wet winter.   This years heavy rains have kept everything lush and green and wildflowers are in abundance.  During early morning and evening hours the black tail deer peacefully forage and at dusk the bats come out in numbers performing an aerial show grazing on insects in the sky.

My job as a realtor takes me throughout the county and I get to interact with local residents as well as out of town visitors shopping for homes.  It’s been just three years since we moved from the SF Bay Area, and while I don’t have the long history like many residents I feel very connected to the foothills after a relatively short amount of time.   I enjoy sharing my experiences and passion for my new community with out of town clients who dream about a owning a home in the foothills. A similar dream that I had as a young man.  But my dream was put on hold – forgotten actually – when I stepped onto a fast paced life in the Bay Area.

I have no regrets about my life in the Bay Area.  How could I?   Holly and I prospered living and working so close to the Silicon Valley as it was becoming the Silicon Valley.   As we raised a family in suburbia that Valley became the center of the technology universe creating even greater opportunities for myself professionally as a business consultant.

Humble and modest relative terms.  But I believe we led a humble and modest life in the Bay but I recognize it could be considered privileged and even lavish by someone fortunate.   Holly was mostly a stay at home mom when the kids were young and I was etching out a career.   We were a one income family when so many others in our peer group had two incomes.  So for us there wasn’t a lot of expendable cash.  It was worth the trade off of never having to rely on day care for our small children.  We worked hard and over time we prospered driving nice cars, living in upper middle class neighborhoods in nice homes, and sending our children to the colleges of their choice regardless of cost.  We lived a very comfortable life in suburbia not wanting for much and reaping the rewards of our hard work and good fortune.   So why leave, right?

Honestly, when we moved the the foothills it was a leap of faith.

My dream of living in the mountains in an area with a slower pace of life was rekindled after a visit to a friends vacation home in Groveland, CA.  I dreamed about  living in “the country” every day versus having to drive to the country for a day trip or vacation.  And while Livermore was a great community to raise kids in it was not the community I had longed for as a young man.  So when we moved was I sure I was fulfilling this dream?  Not by any means.  But I was sure that with Holly by my side and our two (two at that time, now three) Golden Retrievers along for that leap it could be everything I had dreamed about.

Over the years I’ve said that raising kids was was 10 times harder than I expected and a hundred times greater and more rewarding than I could have imagined.  And so it is with this life in the mountains. Life on 5 acres in a forest in a town called Tuolumne.   It too harder is harder in some respects than I had expected.  But it is also much more rewarding than I could have only imagined when I took that leap of faith.

The Golden K is our home.  It’s a state of mind.  And it’s also a journey.  And that journey started three years ago with this first post:  “The Golden K Begins Now“. 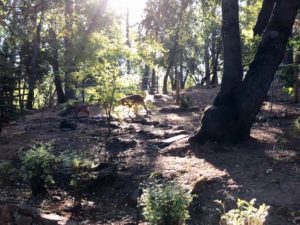