Three of my favorite television shows growing up had rural settings.  These 1960’s sitcoms were The Andy Griffith Show, Green Acres, and Petticoat Junction.  Each portrayed a simpler time with down home folksy characters that reflected much of middle America at the time.  Story lines were thin, the humor was corny (but sometimes hilarious), and the characters endeared themselves to viewers with their humble and good natured demeanor.

Tuolumne City is not a Mayberry (Andy Griffith), a Pixley (Petticoat Junction) , or even Hooterville (Green Acres).  Ok maybe a Hooterville… and that’s a good thing.

In those fictitious towns when townsfolk asked how you were doing they were sincere.  There wasn’t a rush to get anywhere. Strangers were made to feel welcome. The general store was where you went to buy “supplies”.  Dinner was called supper, your nice clothes were your “Sunday go to meetings”, and tomorrow was always at least a day away.  Parents worked hard, kids had chores, and everyone felt safe walking home in the dark from an ice cream social at the town hall.

Were these towns from my favorite shows real life in the sixties or just fond memories of the screen writers and producers?  Every American generation looks back at some point and longs for the times when they were younger, America was better, and life wasn’t so complicated.  The sixties had it’s share of turbulence and angst, especially late in the decade.  Rock and Roll had emerged as a powerful force both musically and politically.  Civil rights was at the forefront of our day to day lives. The Cold War impacted our economy and threatened our security emotionally if not physically.  Earlier in the decade our lives were rocked when a popular president was shot and killed in Dallas and the world watched as we grieved.

Growing up in the San Francisco Bay Area the complexities and struggles of the times were a daily reminder to me that I wasn’t in Pixley.  I wasn’t in Mayberry.  I was in the “big city” and even then, as a young child, I longed for a simpler life.  As a young boy I was anxious to grow up so I could fall in love, marry, and raise a family.

As I sit here at the Golden K at 3100 feet I’m humbled by the beauty around me.  The beauty of my five acres, my neighbors five acres, and the neighbor up the road’s five acres. Nestled in between all the pines and oak trees I can almost see Andy sitting on the porch across the road with Aunt Bee.  Down the road I think I hear Oliver Douglas yelling to his farm hand Abe to hitch a wagon.  And in the distance I hear the Cannonball’s whistle blow as it slows to a stop in front of the Shady Rest.

The Golden K transcends fictitious towns, turbulent times, and life’s complexities.  Up here on the hill the earth spins just a little slower. It’s reminiscent of the simpler time I saw on my TV shows when I was a kid.    I know Tuolumne is not a Pixley, not a Mayberry, and not a Hooterville.  OK, maybe Hooterville and how awesome is is that… 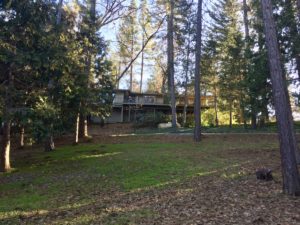